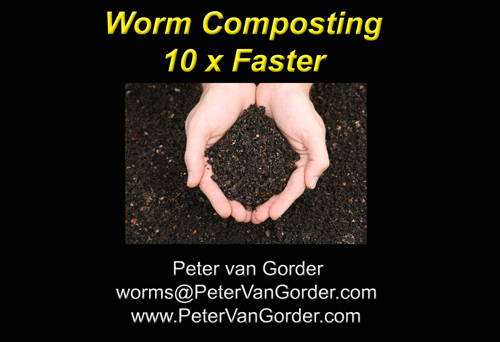 Accelerated Worm Composting is a method of composting invented by designer Peter van Gorder in 2008.

We hope you’ll make your own and not only make this Earth a better place, but make this place into better Earth!

Make your own worm composting accelerator!

(no, it does not spin worms at super speeds or launch them into space)

It may be doubted whether there are many other animals which have played so important a part in the history of the world, as have these lowly organized creatures.
 Charles Darwin 1881

The main discoveries that led to the Accelerated Worm Composting invention and method are:

Fruits and vegetables come wrapped in natures very best candy wrappers. One could say that the main purpose of the skins on nature’s fruits is to keep the rest of nature out; To keep the bacteria that’s ever present everywhere from eating the fruit before it’s finished growing.

By mashing/masticating the food before putting it into the worm bin we are also removing the “wrapper” so that everyone can get access to the food more rapidly – before anaerobic bacteria move in.   Of course, the fruit skins are not removed, just broken open in a way that accelerates and maximizes bacterial/fungal/worm feeding capacity and the thus the overall decomposition process.

Leave a reply Click here to cancel the reply